The Conseil du statut de la femme and the Centre for the Prevention of Radicalization Leading to Violence today jointly filed a new study, Women and Violent Radicalization. Though a marginal and relatively undocumented phenomenon, the violent radicalization of women does happen, including in Québec. To complete this project, the research team met with people who have been personally affected by violent radicalization, including several young Québec women who tried to go to Syria, along with their family and friends. The field study explores their motivations, trajectories and reasons for going or attempting to go to Syria. This initiative was carried out under the 2015-2018 Government Action Plan Radicalization in Québec : Act, Prevent, Detect and Live Together. 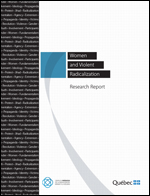